Merdeka.com - The Ambaidiru Terrorist Separatist Group (KST) in Kosiwo District surrendered. They declared again to be part of the Unitary Republic of Indonesia.

"Papua has always been Indonesia, Indonesia is Papua. So there are no longer external struggles, there is no longer such a thing as a struggle in the name of Free Papua or West Papua, West Papua. As a candidate for the next generation of the nation, this is our country, the Unitary Republic of Indonesia," said Ferdyan, Sunday (19/12).

"It's time for us to fight for the welfare of our society by increasing the quality of human resources, especially in the Yapen Islands Regency. Then from the education side, the health side is also the same as we protect our brothers, parents and our younger siblings from disease or especially at this time We are facing the Covid-19 pandemic," he continued.

As security forces, the TNI-Polri have a high commitment to safeguarding their jurisdiction.One of them considers the Yapen community as part of their family. The TNI-Polri assist the Yapen Regency Government to develop the Yapen Archipelago and help accelerate the welfare of the community.

"We, the TNI-Polri, including the regional government, will not remain silent. Therefore, after we carried out law enforcement activities yesterday, we will continue to carry out enforcement efforts in a persuasive and humane manner to provide understanding and convince all my brothers and sisters that the existing TNI-Polri officers in Yapen Archipelago, not as enemies but as family," he said.In addition, his party admits that they are currently focusing on protecting the community ahead of the 2022 Christmas and New Year (Nataru) celebrations.

"We must ensure that Christmas celebrations run peacefully, safely, joyfully and full of wisdom so that all of our brothers and sisters who celebrate Christmas can carry out their worship in peace," he said.Dandim 1709 Yawa Lieutenant Colonel Inf. Catur Prasetyo admitted that the existence of the TNI-Polri was not meant to scare the public. Together they want to advance development in the Yapen Islands region.

"And it is necessary to know that according to the instructions of the TNI Commander, that we are making friends who are on the other side aware that we are the Unitary State of the Republic of Indonesia, so no one else thinks that Papua will be independent.

We are very proud and happy with the cooperation between the TNI and Polri in the region so that Our colleagues, my brothers and sisters can, with a high enough awareness, want to return to the lap of the motherland of the Unitary State of the Republic of Indonesia," said Catur.

One KST admitted they had followed the wrong path. He promised to unite with the Indonesian people in advancing the country."The police chief has said that we don't need independence anymore, we have all agreed to bring ourselves here and admit our mistakes," he said.

The Head of the Nemangkawi Public Relations Task Force, Kombes Ahmad Musthofa Kamal appealed to other KST members to follow in the footsteps of their brother who surrendered to the Republic of Indonesia.

"So that the Kamtibmas situation is more conducive and concentration can be focused on developing the region by increasing human resources as well as advice and infrastructure to support people's lives to create prosperity," said Kamal. West Papua Daily. As part of the Unitary State of the Republic of Indonesia, Papua is one of the border areas with various concerns that are far away and difficult to enter into the supervision of Indonesian government stakeholders. With an area of ​​±312 km2, the mention of Papua in this narrative includes the provinces of Papua and West Papua.

In addition to its sizeable area, coupled with a truly diverse natural biota, making Papua one of the regions with the largest contributor to goodness for Indonesia.

Ellyas Paprindey (Chairman of the Papuan DPRD 1974-1977 and Deputy Governor of Papua 1977-1982) in Maniagasi (2001) once stated that the demands for independence by the Papuan people were caused by feelings of dissatisfaction due to injustice for the Papuan people in development. In line with this statement, the Indonesian Civil Society Partnership, Initiative, and Participation Strengthening Foundation (YAPPIKA) stated that the Papuan population considers the government and security forces to be more in favor of the capital owners who are immigrants compared to the indigenous Papuans, as evidenced by the means of production. controlled by immigrants.

Raweyai (2001) in his writings also states that local Papuan communities have difficulty accessing markets, thus limiting the development of agricultural products and the processing of other agricultural products. Siregar (2014) further explained that the local identity group referred to, one example is the Free Papua Organization (OPM) which often has an anti-government attitude and voices the desire of some Papuans to separate themselves from the Unitary State of the Republic of Indonesia so that it is not impossible for Indonesia to lose Papua -as happened with Timor Leste.

President Soeharto to Joko Widodo (Jokowi) made infrastructure development in Papua, especially roads, one of the solutions to the problems of underdevelopment, poverty and geographical isolation.

This commitment has been further strengthened, one of which is evidenced by the making of the Papua Special Autonomy (Otsus Papua) policy during the Habibie Administration which was subsequently ratified in the MPR Decree Number IV of 1999. The special autonomy as outlined in the 1999-2004 State Policy Guidelines shows that that recognition, development and resolution of human rights cases are the main elements for special autonomy in Papua (Dewi, 2020).

The program for accelerating development during the Special Autonomy period has contributed to increasing Papua’s development budget. Papua receives at least 2% of the total national budget allocation through the Special Autonomy policy. President Jokowi’s administration has widened the faucet for funding and investment through the Merauke Integrated Food and Energy Estate (MIFEE) program, DTI funding, and oil and gas revenue-sharing funds.

Not without results, one of the development progresses during the 2002-2019 Otsus Papua period that can be seen is the construction of the trans-Papua road. This development effort has opened access to areas that have been isolated, especially in the central highlands, such as Yahukimo, Nduga, Tolikara, and Puncak.

Minister of PUPR for the Advanced Indonesian Cabinet, Basuki Hadimuljono, also emphasized that efforts to open up regional isolation and improve access and connectivity from land and multimodal, especially the Trans Papua Road with a total length of 3,462 kilometers, are being pursued to improve the welfare of the Papuan people. Of the total length, currently the road that has been through is 3,446 kilometers, with 1,773 kilometers of asphalt, and 1,712 kilometers of unpaved roads.

In his writing, Apadurai (1999) explains that conceptually, the way to encourage the process of globalization is through the movement of people, capital commodities, and information from one place to another. Connectivity has helped residents cope with the high prices of basic necessities in remote villages. Some residents usually rent a box car together to then shop for various basic needs in big cities (LIPI and TAF, 2018).

Not only from an economic perspective, increasing connectivity also has an impact on the pattern of social relations between OAPs. In the values ​​of the Papuan people, the intensity of visits to relatives living outside the village is important for them and is useful for overcoming life problems in difficult times so that increasing connectivity can make it easier for villagers to visit relatives.

Increased connectivity also has an impact on changes in social interaction patterns of mountain and coastal communities as well as between OAP and non-OAP communities. With improved connectivity, citizens’ access to basic services such as health, education and population administration is also getting better. 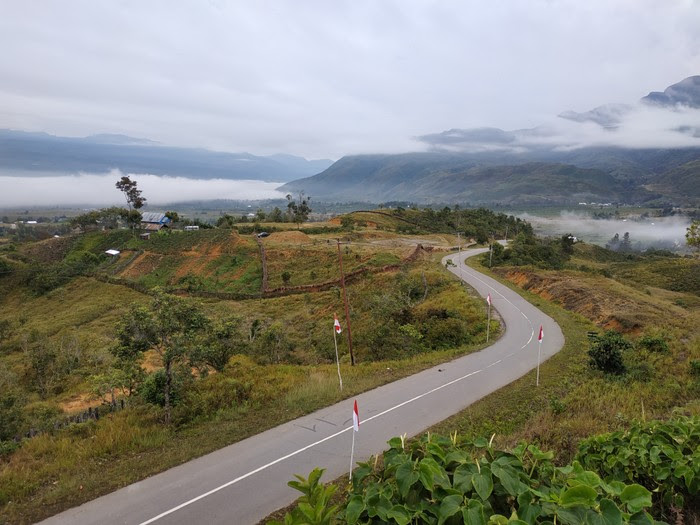 The efforts made by the Indonesian government in overcoming the conflict between Papua and Indonesia through development have actually been extraordinary. However, in practice, the reality on the ground is often not as planned. In the priority allocation of Special Autonomy funds for development in Papua, it is still not sufficient to analyze conflicts in the land due to uneven development.

The approach taken by the central government should be changed. The perspective on socio-cultural and customary aspects should be seen as a bridge for the involvement of the Papuan people, and not as an obstacle. This makes consultations with all parties, from the central government to high-ranking Papuan people, very important to do so that a new paradigm is created from ‘Papua Land Development’ to ‘Papua Builds’.